Description: Josh Izenberg is the Director of “SLOMO”, a short documentary about a man who abandons his career as a neurologist, trading his lab coat for a pair of rollerblades and his IRA for a taste of divinity. Winner of Best Short Documentary at SXSW.

You used to work as a cab driver— what’s the weirdest encounter you had on the job?

Oh God, I had a lot of weird encounters on the job. I went out way out to the boondocks, and some guy called a cab for his brother, who is an adult guy— put his brother in the back of the cab, and said, “Don’t worry, he’s not going to hurt you.” And I was like, that’s a really weird to say because I wouldn’t have thought that. But when you call attention to that… But then while I was giving the guy the ride, the guy kept saying “Don’t worry. I’m not going to hurt you.” (laughs)

Description: Casey Modderno wrote and directed “Disgrace,” a short film about a dysfunctional family forced to deal with a young boy’s sexual perversion.

You were in the New Haven punk scene prior to college — what’s a memorable experience from that time?

I went on a few tours, early in high school. That was my first exposure to all of the US, Americana and stuff. We would stay on people’s couches and meet interesting characters and learn about what was happening in all these cities along the East Coast. It was really broadening.

What movie changed how you thought or felt about things?

I fell in love with “The Lion King” and watched it over and over. I remember there’s that scene in it when the cub grows up just by walking over this log, and was made into his older self. And I think that was the first time of my becoming aware of a film technique, or something happening in a film. I was amazed that there was this medium that could show you the passage of time just like that, with the snap of a finger.

Posted on January 13, 2018January 13, 2018 by Molly Yang 0
City: San Jose, Costa Rica
How did you come to be a musician?
It just happened in a crisis. I was depressed and trying to get myself together, and I decided to start playing guitar because it was a healthy way to get rid of the anxiety that I was feeling. And I started playing almost 8 hours a day, and after 2 weeks, I was playing a song. After three months, I was playing a bunch of covers at parties. And after a couple of years, I was writing songs. But it took me about a year to show them to people. It saved me because I was going through a hard time and it’s always been a good way of turning difficult experiences into something that could be celebrated somehow.
What do you think about more than anything else these days?
Well, I’ve always thought about love a lot. I think I’m kind of an incurable romantic kind of person. I can’t help it but I think about love a lot— I think about romantic love a lot. My parents are soul mates, and I’ve always had this illusion — I put this kind of love very high place.
Posted on January 13, 2018January 13, 2018 by Molly Yang 0
City: Ithaca, New York

What is a topic that fascinates you?

I’m very fascinated by the plant world— the sort of emotional, experiential, subjective side of plants. I see the world as being interconnected, and I’ve always thought about it that way. Then every once in a while, there will be these scientific discoveries, you know, like “turns out that the trees in the forest are actually communicating with each other.” Traditional cultures around the world always had people in their community that spoke to plants. That’s where a lot of traditional knowledge comes from for medicine. But then the scientific community will discover something that traditional people have known all along, like “scientists discover that roses are actually medicine for the heart” and in my mind it’s like “Oh well, thank you Captain Obvious for sharing that discovery” because it just seems like these things are traditional knowledge. People are able to communicate with plants. Plants are able to communicate with people. There’s a language in the world all around us that’s a lot deeper than the technology of words, of alphabet, and communication that we think of as being so advanced— our media, and our writing in our books.

What do you worry about these days more than anything else?

I’ve been in New York for a while now, and I’m feeling ready to move to the country soon. I’ve been here for a while and there’s this franticness in New York City that’s exhilarating but also kind of exhausting. Once you leave the city, you realize it’s not the center of the universe, and sometimes maybe what’s really, truly important gets away from you.

What book changed how you think about things?

The book that really blew by my mind was “Of Water and the Spirit”, and it’s [a true story] by this man from Burkina Faso. He was raised in a tribe and then he was abducted by a missionary when he was very small and was brought to a Jesuit school, and escaped when he was teenager and went back to his tribe. And he went through the initiation process that all the boys in the tribe go through. But because he had been Westernized, it was really difficult for him. And it was interesting to see the way he described the process, and the way there’s so much magic in it. They’re out in the forest and these magical things are happening and that’s just part of their culture and belief system. It’s such an amazing point of view.

If you could give advice to your 16 year old self, what would you say?

Chill the fuck out. Don’t pretend to know what you’re doing. I was a real fucking go-getter of a 16 year old. After high school, I took a year off before college and tried out stand-up in New York at 18, which was crazy and weird, and I eventually shacked up with my girlfriend’s sister. Not shacked up in a sexual way. But I had to live somewhere, and she helped me out.

What was a memorable experience from that year?

Performing avant-garde stand-up to people who hated it. I was very influenced by Andy Kaufman and Steve Martin, and I had this one bit that stemmed from this book that Fabio wrote, the model. In the “About the Author” section, it was all about how sexy he was. So then — and again, this is as confusing to me as it was to the audience, looking back — I think what I ended up saying was “It sucks that you can use sex to sell books, so I’ll just use sex to sell jokes” and then I put on some jazz music and stripped into tights and read knock knock jokes to the audience, sexy-like. It didn’t go well.

What is something that you regret?

I once was in this gospel choir in college– this is in San Diego. I had never been to New York before, and the gospel choir was able to go sing in Carnegie Hall for this really awesome, once-in-a-choir-lifetime thing. And I was dating someone at the time, and he really didn’t want me to go, and I didn’t go. And I don’t regret anything more.

What do you think about these days more than anything else?

To spend more time working on personal artistic endeavors and less working on my commercial stuff. I’ve been dying to dive into a music video like I dove into “The Music Scene.” That took me half a year to do. I’ve been thinking a lot that I just need to spend that amount of time on something again, something personal, that I have full control over. It’s one of those things that builds up in you over time, especially with the more commercial work you do, you get antsy and need to take time to do something real for yourself.

What was your proudest moment?

The other day I checked my credit score— better than my father’s. And I called him up, and I shoved it in his face. That was a good moment. (laughs) 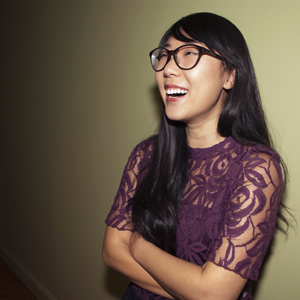 How did you begin doing spoken word and poetry?

(laughs) This is the origin story that I always tell, and I’m not even sure if it’s true anymore. I think what happened is that I read Allen Ginsberg’s “Howl.” And I was like, holy shit, this is poetry that is exciting and dirty and risky and angry and it’s clearly meant to be read aloud. And I knew that the controversy was that Ginsberg had read this poem out loud in public, and I was really fascinated and captivated by that idea. So I sought out open mics in Atlanta—  where I went to high school— and sort of went searching for that same type of energy, and what that felt like today. And that’s kind of how I started– how I got on this winding path to poetry.